Back in February 2011 Formula 1 racing driver and upcoming star, Robert Kubica had a serious crash whilst rallying in the off season. Here is my blog about Robert Kubica's crash. 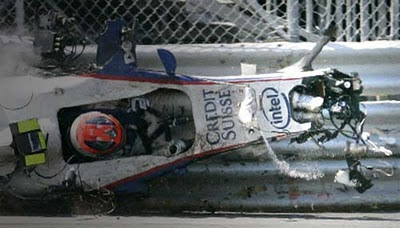 Very much like his fellow driver Felippe Massa's near death experience with a piece of debris entering his cranium, Robert's injury put all of Formula 1's eyes on him. Unlike Felippe, Robert was unable (so far!) to return to the pinnacle of open wheel racing, which is Formula 1.

But good news! Robert is back to racing.

Autosport had this to say:

Robert Kubica took victory on his return to competition in an Italian domestic rally on Sunday.
The event was the first motorsport contest the Pole had entered since sustaining horrific injuries in a rally accident in Italy in February 2011.
...Kubica won all four stages of the Ronde Gomitolo di Lana rally to claim victory by nearly a minute over Omar Bergo's WRC Mini.

Before the start of the rally, Kubica told Italian television channel SkySport24 that the event marked the start of "a more active phase" in a recovery that he still hopes will bring him back to Formula 1 eventually.

And we're all sitting here waiting for your return sir!