A newspaper in New York has received a wave of criticism from its readers after publishing the names and addresses of all of the individuals with handgun or pistol permits in its coverage area.

Hundreds of residents in New York's Westchester and Rockland counties were surprised to find their names and addresses listed on a map posted by The Journal News on Sunday. Users can click any dot on the map to see which of their neighbors has a permit for a gun.
The map sparked more than 500 comments from readers within a day of its appearance on the website, many of them voicing outrage at the paper's decision to make the information public.
The full article can be found HERE


So what would a proportional response be for the individuals whose details were published? Track them down and leave a horse's head in their beds?

Oh no, they're a bunch of conniving ne'erdowells down there

Apparently these are the addresses of the "journalists":

Oh yeah, these people gave as good as they got.

Now try and Google your own names Janet Hasson, Cyndee Royle and Nancy Cutler. You won't be getting any relevant results until page 20 at least!

Hat-tip to Wirecutter over at Knuckledraggin My Life Away

I despise websites that make it nearly impossible to buy from them. I'm also lucky enough to work in a position where I can control my own clients' websites (to some degree) from becoming evil.

Instead of showing you a variety of naff websites, I thought I'd show you how Google sees websites that just don't help users. Their explanations are great and should be shared to the world!*

* slightly over zealous, but heck, its what I do!

Yup, I finally managed to send a blog-friend the photo I took for him.

The murder of innocent children.

What should our reaction be and what is our gut instinct?

My gut instinct reacts to the pain and anguish for the kids and their families. My reaction is to listen to all sides int his argument.

Like Insomniac Medic, here, I'm confused. I've discussed numerous times before, and again this week, with people in my office who say 'ban all guns' but that just cannot be the answer, if only because it's slamming the barn door shut after the horse has bolted.

The best, most level headed and expert opinion I have read has been from Larry Correia who is now a successful (and gifted!) author, but before picking up the pen, was a gun store owner, weapons instructor and gun enthusiast. I strongly suggest you read his excellent piece 'An Opinion On Gun Control'.


If, after reading Larry's opinion, you are still worried that the government are coming to take away your rifle or ammo, read this piece by AnarchAngel 'Stupidity, Politics and Math'.

And remember - let's keep safe out there.

I work in the advertising business, at the sticky end of the online ad business in fact. I get to watch quite a few ads on a daily basis. This one just blew my socks off.

What did i love about it? Not only is it funny, but it states time after time what the product is and why you should buy it, something we as advertisers have shied away from - 'its all about the brand' or 'let the custoer decide' - piffle and tosh!!

And it is funny and it looks like it was made for $75 and that it appears that they had a tonne of fun doing it!


What do you think?


I've been a tad busy recently what with there being a war in our neighborhood 'n all. That seems to be over for the near future, thankfully, but here is the real secret behind Israel's success. I don't want to sound all 'hippy' and such, but really, without this amazing piece of technology, Israel would have suffered many more fatalities and injuries than it did.

Troops stationed in Afghanistan recently sent in their very own version of our "Call Me Maybe" video. Watch how they match the cheerleaders' video move for move!

In the midst of all the war stuff going on outside, I decided to have a look back at 2013 and see what positive things happened.

I was happy to find a very positive, and human led, mash-up of various online videos.

I'm happy to see that people and animals (and maybe a bike or surfboard or two) still win hands down when it comes to making us smile and say 'How did they do that?'.

As a lover of stingrays I had to share!

So you might have heard that a few rockets have hit Israel in the last few days and I can assure you that I am pretty gosh-darned miffed about it.

Mainly because I live in Israel.

I'm not a source for information regarding the present conflict, I just spent the weekend with my wife and kids in our house, and I really don't trust the news, but I do like what this chap has to say about peace in the Middle East though.

If you 5 have minutes I strongly recommend watching it. It explains a lot.

I sit in my office cubicle, drinking my warm cup coffee and nibbling on my Special Tea biscuits, when up pops a youtube video I haven't seen for a while but remember well.

It must have left a good impression on me if I remember it from just the halfway picture. And then the penny drops, its of a young chap who trekked a few thousand kilometers across China and took a photo of himself every day.

The History of Rap

This video came to my attention today, after  friend was honored to see it on a plane in New Zealand:


I just like the fact that someone cared enough to make it interesting and informative and not boring and dull.

Do you see what she's trying to say here? 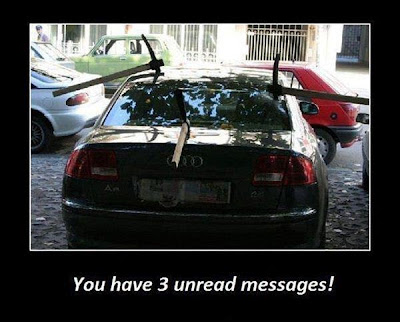 Remember me telling you all about Larry Correia's new book back in October 2010? Or, more recently, about Monster Hunter Legion - Limited Signed Edition last month?

Well, then you'll understand why I am over the moon to hear that I am the winner of the Monster Hunter International prize mega package. I'm just blown away.Signed books, a poster and hopefully - and this is priceless - my name in Larry Correia's next book.

The weird thing is that I am a tad cash strapped at the moment, what with having a 3 year old, a 1 year old and a wife at home - and no chance of a promotion or pay raise any time in the near future. So when I read of Jay's plan of raising money for a prostate cancer charity I thought 'nice idea, but I gave at the (tax) office'.


And then I remembered Jason Boas. A friend of mine from high school. We'd gone our separate ways after graduation but I'd been in touch with him here and there over the years and then in the last few months of his life he came to a hospice in my area for care. We were going to meet up but he was just too weak to even chat on the phone sometimes.Sadly, as I reported back then, Jason died in November 2008.

Its nearly November now, and I remember Jason at this time of year so I thought 'heck, I'll donate to this charity and even when I don't win, I'll feel happy about doing it'.

So I'm triply happy; to be able to give to a great charity, to win the mega prize and to be able to remember Jason and pass on to others the message of his charity - 'No Surrender'.

The bicycle has been around for a while now. Bicycles were introduced in the 19th century and now number more than a billion worldwide, twice as many as automobiles.


They are the principal means of transportation in many regions. They also provide a popular form of recreation, and have been adapted for such uses as children's toys, adult fitness, military and police applications, courier services and bicycle racing.

The basic shape and configuration of a typical upright bicycle has changed little since the first chain-driven model was developed around 1885. However, many details have been improved, especially since the advent of modern materials and computer-aided design. These have allowed for a proliferation of specialized designs for diverse types of cycling.

And then this chap came along and had the gall to change it all! This Bicymple is a surprisingly interesting little thing and I wonder what applications can be found for it: