Jesus wouldn't be riding a donkey

Like 99% of the population of the world, I have never had much time for televangelists. They prey on the gullible and the weak in their greatest time of need.

Pat Robertson is also a character in The Simpsons 'He is one of the many people on "Ned's List of Laudable Lefties".'

So there is definitely comedy in the air around these swindlers. Even so, I was surprised to see this on that bastion of sense, the Christian News Network:

Does this man have no shame? I guess not. Nor does he have much respect given to him by the same publication as it begins its story..

False teacher and prosperity preacher Jesse Duplantis is now asking his disciples for money to buy a jet that costs $54 million “so we can go anywhere in the world in one stop.”

Wow, no punches pulled here then. Don't worry though, MSN.com, CBS News and the LA Times also derided the televangelist.

Televangelist wants his followers to pay for a $54-million private jet. It would be his fourth plane


Apparently this chap preaches the 'prosperity gospel', which says God shows favor by rewarding the faithful with earthly riches. Giving money to pastors and their ministries, leaders say, is a sort of investment.

So that's nice. He is not like the Preacher I enjoy watching on TV:

Somehow I don't think we'll be making any donations to Jesse Duplantis any time soon.

I find that Memorial Weekend has lost some of its value in the last few years, even though wars continue.

According to the History Channel:


Memorial Day is an American holiday, observed on the last Monday of May, honoring the men and women who died while serving in the U.S. military. Memorial Day 2018 occurs on Monday, May 28. Originally known as Decoration Day, it originated in the years following the Civil War and became an official federal holiday in 1971. Many Americans observe Memorial Day by visiting cemeteries or memorials, holding family gatherings and participating in parades. Unofficially, it marks the beginning of the summer season.


So here is Picture of Heartbreak, I know it affected me. 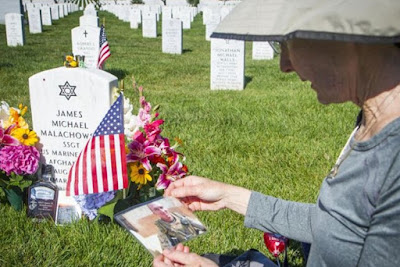 A mashup (also mesh, mash up, mash-up, blend, bootleg[1] [2] and bastard pop/rock) is a creative work, usually in a form of a song, created by blending two or more pre-recorded songs, usually by overlaying the vocal track of one song seamlessly over the instrumental track of another.

That's not the point, this is;

Scary eh? Even the videos kind of melt together.

And now the songs melt into each other...

Sometimes the videos and songs are surprisingly similar. Heck, its an industry, not a single artist.

I grew up learning to shoot on the Lee Enfield IV rifle, and graduated on to the SA80 to go full automatic - well, semi, anyway. If there had been a GM6 Lynx I would have wanted to fire it, but never would have - far too much to play with on a range day!

The GM6 Lynx is a 50 cal semi-automatic anti-material rifle. It is a bullpup, but that is not the interesting part. The barrel reciprocates all the way back. Just watch the video, I could watch this thing shoot over and over again. What a beast;

Ain't Nothing New Under The Sun

You might have heard recently of a popular musician called Childish Gambino. On many levels I hope that isn't his real name, mainly because as a kid he would be called out for being 'too Childish'. And possibly a member of the Gambino crime family.

Anyhoo, he came out with a bit of a controversial and thought provoking video recently, This Is America:

Which is all fine and dandy. Then someone realized that it was at the same tempo as another famous song;

So yes, there is nothing new under the sun.

Email ThisBlogThis!Share to TwitterShare to FacebookShare to Pinterest
Labels: Call Me Maybe, Childish Gambino, Hiro Murai, This Is America

This little video might somehow make you get some dust in your eyes;

It all started with a friendly Alabama greeting in a small Mississippi town. One Tuesday morning, Kathleen Reynolds of Clinton, Mississippi, was outside with her grandson, Kyler, when the local waste management company rolled up to collect the trash. Noticing Kathleen’s Alabama sweatshirt, sanitation worker Clarence Weathersby called out, “Roll Tide!” The family exchanged a friendly wave and nod, and Kathleen didn’t think much of it.

The following Tuesday, three-year-old Kyler was excited to see the garbage truck coming down his street again. “He started waving at the guys and they started waving back,” Kathleen explained, “and then around Halloween and Christmas we made treats for them. We took them out to them and they just loved them and then they started picking Kyler up and he started learning how to operate the garbage truck.”

Now, every single Tuesday, Kyler can’t wait to help his grandma take out the garbage so he can see his buddies again. When the truck rounds the bend in the road, Clarence gives the horn a few toots, and Kyler breaks into an adorable happy dance. Kyler likes to bring snacks and treats for Clarence, whom he calls “Bugg Bugg.” With Bugg Bugg’s help, Kyler even helps put the garbage into the truck and pulls the lever to squash it down. That’s pretty exciting stuff for a little kid!

Bugg Bugg treats Kyler like a family member, swinging him up for hugs and kisses, and even giving the little boy a present for his birthday. Kyler’s got enough love to go around, though. All three of the men on the truck now stop to say hello to their favorite little guy. He really brightens their day! “Bugg Bugg just treats him super special,” Kathleen said. “He picks him up like it’s a little brother thing … it’s great to see the interaction between them.” “They’re just friends, and they just know love and they know kindness, and that’s the great thing about this.” What a wonderful bond, and a great reminder that you just never know where you might meet your next friend! Watch Kyler’s sweet happy dance below, and don’t forget to share!

Yesterday we went out for a hike with some friends. Nothing special just a quick jaunt into the local historical ruins to stretch our legs a bit, and get the kids out of the house.

We were 4 adults and 7 kids, so there was a caravan of us, older kids running ahead and the dads and the babies at the back. All very cute.

There were some fun caves for the kids to play in, and for us to take photos. The only problems we encountered were cow-pies on the path and some biggish bugs that decided that one of the kids red shirt was worth landing on!

The old church was our goal and we got there in 1 piece, which is more than I can say for the church. 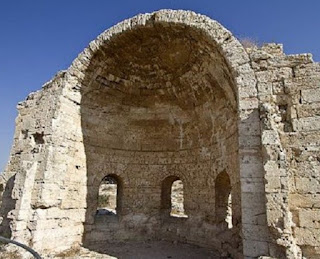 The standard photos were taken for Facebook and family overseas; 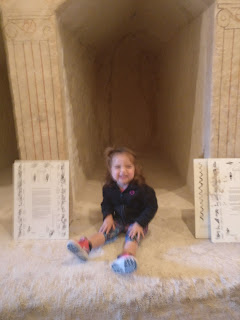 We decided to return down the path we had walked up to get ice cream and soft drinks from the little store. My friend, the father of some of the kids, was having a hard time. He had been in hospital the last few days with kidney stones (oy!) and was ghostly pale. I chatted with him for most of the return leg but walked ahead when my wife shouted that she needed me (well, my wallet anyway).

About 5 minutes later we were sitting in the shade, eating cool ices when my friend phoned his wife, who happened to be sitting next to me. It was weird because I could see his red shirt not 60 metres away, walking into a hedge.

'He's got a bug in his ear' she said to me. I gave her a look of non-belief. She agreed 'he probably had a bug near his ear and he got all scared' she said.

We were all wrong. 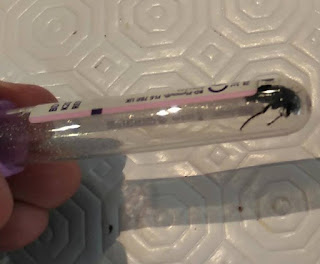 This is what the little bugger looked like. Sufficed to say, our friend won't be leaving his house for the next decade or so.