Wow. 2017 looks like it's going to be an awesome one for the cinema:

Martin Scorsese has a new film coming out. 2 young women in a small town realise that they are not who... NOT! Its a shoot 'em up, in a warehouse, in 1978?

Edgar Wright is the director and writer behind The Cornetto Trilogy - Shaun of the Dead, Hot Fuzz and World's End - which if you haven't watched, you should.

He has created a new action movie, which would be my number 1 choice, if it had Mr Pegg in it. Which it doesn't.

However, Kevin Spacey, Lily James, Jon Hamm and Jamie Foxx are in it so it will still be awesome!

Britain's answer to the German invasion of France was to launch the British Expeditionary Force. After the First World War, being a regular member of the British Army was looked down upon. Funding for the army was cut dramatically to lower than pre-war numbers and overall, it was a bad place to be.

So an unprepared army going into a foreign country, under-funded, under-equipped and badly led. What could possibly go wrong?

Then there is the much awaited Guardians of the Galaxy Volume 2.

Enjoy - and let me know what you're looking forward to.

Acquiring a Pair of Brown Trousers 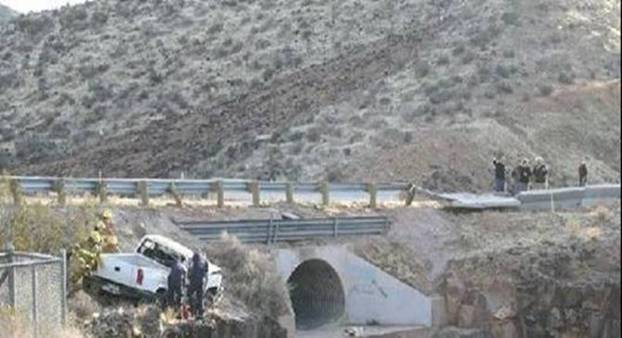 Just outside of Hurricane City, Utah, the driver of the truck you see in the lower left lost control of his vehicle. The pick-up was traveling at roughly 75 miles an hour when it broke through the guardrail in the upper right (if you look closely, it's where the group of people are standing), flipping end over end, bouncing off and across the culvert outlet you see in the center of the photo.

The truck ended up on the left side of the culvert, facing the opposite direction from which it had been traveling originally.

The driver and his passenger were unhurt except for minor cuts and bruises.

All of this would be astounding in and of itself, because damn, son,  you flipped your truck OVER a fucking culvert and around backwards and lived to tell the tale! Except when you pan out.....