A rather sad and tragic article about our troops 'over there'.

By John CantlieGereshk Valley, Helmand
After 10 years in Afghanistan, foreign troops can claim successes in the notorious province of Helmand - but a vicious guerrilla war still rages in the Upper Gereshk valley, which US marines are in the process of handing back to British forces.
It has only just turned 07:00 and it's already pushing 35C (95F). The three litres of warm water you drank at dawn have already soaked into your flak vest. 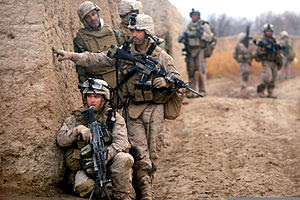 The patrol advances slowly, inching through poppy fields like their lives depended on it. Suddenly a massive explosion rips through the air less than 50m behind. The Taliban have booby-trapped the right-hand gate of the compound with a grenade and an IED (improvised explosive device) during the night. By chance we exited by the left gate.
"Well good morning to you, too," grunts a marine.
Tough Reality continued