When I first read the tile of this article I thought that there would be a cutesy little story of a well dressed little kid in a supermarket in New York or Central London who had lost his Mommy and somehow had used an app on his iPhone to find her again a few hours later, when reunited everyone laughed and said trite comments like 'kids these days' and 'what will they think of next'. Hugs and chocolate biscuits all round and next story is of a panda falling off a slide.

But I was wrong.

This is in fact a story of a man who has become who he is today through fate, luck and, unlike so many of his contemporaries, a graduation from the school of hard knocks.

Read it, and if you don't shed a tear leave a comment as to why!


An Indian boy who lost his mother in 1986 has found her 25 years later from his new home in Tasmania - using satellite images.
Saroo was only five years old when he got lost. He was travelling with his older brother, working as a sweeper on India's trains. "It was late at night. We got off the train, and I was so tired that I just took a seat at a train station, and I ended up falling asleep."
That fateful nap would determine the rest of his life. "I thought my brother would come back and wake me up but when I awoke he was nowhere to be seen. I saw a train in front of me and thought he must be on that train. So I decided to get on it and hoped that I would meet my brother."
Saroo did not meet his brother on the train. Instead, he fell asleep and had a shock when he woke up 14 hours later. Though he did not realise it at first, he had arrived in Calcutta, India's third biggest city and notorious for its slums.Continue reading the main story“Start Quote

I do not think any mother or father would like to have their five year old wandering alone in the slums and train stations of Calcutta”Saroo Brierley"I was absolutely scared. I didn't know where I was. I just started to look for people and ask them questions."
Soon he was sleeping rough. "It was a very scary place to be. I don't think any mother or father would like to have their five year old wandering alone in the slums and trains stations of Calcutta."
The little boy learned to fend for himself. He became a beggar, one of the many children begging on the streets of the city. "I had to be quite careful. You could not trust anyone." Once he was approached by a man who promised him food and shelter and a way back home. But Saroo was suspicious. "Ultimately I think he was going to do something not nice to me, so I ran away."
But in the end, he did get off the streets. He was taken in by an orphanage, which put him up for adoption. He was adopted by the Brierleys, a couple from Tasmania. "I accepted that I was lost and that I could not find my way back home, so I thought it was great that I was going to Australia."
Saroo settled down well in his new home. But as he got older the desire to find his birth family became increasingly strong. The problem was that as an illiterate five-year-old he had not known the name of the town he had come from. All he had to go on were his vivid memories. So he began using Google Earth to search for where he might have been born.
"It was just like being Superman. You are able to go over and take a photo mentally and ask, 'Does this match?' And when you say, 'No', you keep on going and going and going."

Eventually Saroo hit on a more effective strategy. "I multiplied the time I was on the train, about 14 hours, with the speed of Indian trains and I came up with a rough distance, about 1,200km." 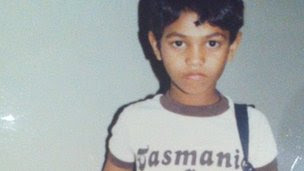 Saroo was taken to meet his mother who was nearby. At first he did not recognise her.
"The last time I saw her she was 34 years old and a pretty lady, I had forgotten that age would get the better of her. But the facial structure was still there and I recognised her and I said, 'Yes, you are my mother.'
"She grabbed my hand and took me to her house. She could not say anything to me. I think she was as numb as I was. She had a bit of trouble grasping that her son, after 25 years, had just reappeared like a ghost."
Although she had long feared he was dead, a fortune teller had told Saroo's mother that one day she would see her son again. "I think the fortune teller gave her a bit of energy to live on and to wait for that day to come."
And what of the brother with whom Saroo had originally gone travelling? Unfortunately, the news was not good. "A month after I had disappeared my brother was found in two pieces on a railway track." His mother had never known whether foul play was involved or whether the boy had simply slipped and fallen under a train.
"We were extremely close and when I walked out of India the tearing thing for me was knowing that my older brother had passed away."
For years Saroo Brierley went to sleep wishing he could see his mother again and his birth family. Now that he has, he feels incredibly grateful. He has kept in touch with his newly found family.
"It has taken the weight off my shoulders. I sleep a lot better now."


And there is something to make him sleep better - with memories of Slumdog Millionaire still fresh, publishers and film producers are getting interested in his incredible story.