An intrepid architect in London has decided to transform a disused public convenience into a residence, The Telegraph reports;


Clark first spotted the loos – with their chained gates and boarded-up stairwells – in 2005, when she moved to London, having completed her degree at the Glasgow School of Art. It was exactly the sort of challenge that the young architect was looking for. ‘I’ve always loved the idea of micro-regeneration,’ she explains. 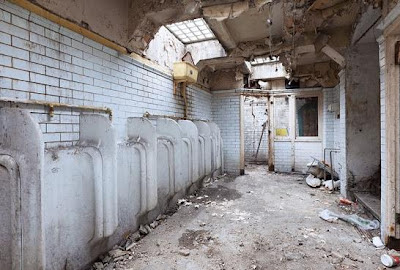 ‘For me that’s about saving sites with an interesting history, but which have been abandoned and forgotten.’ Her initial plan was to transform the two adjacent ex-lavatories (men’s and women’s) into a bar or tiny cinema. ‘I pictured it as something quirky and fun that would breathe life back into a neglected part of the local landscape,’ she says.
In the middle of 2011 Clark found herself the proud owner of the underground public conveniences, built in 1929, last used some time in the 1980s and now filled thigh-high with rubbish. She lost no time in getting stuck in, working alongside builders and labourers in order to transform the dank and frankly creepy space into a bright and airy home. ‘I ended up doing a lot of the labouring work myself, because it was such horrid, hard work that I struggled to keep people on the job,’ she says. ‘And filling skips is character-building.’
Remarkably, the entire project cost only £65,000. ‘But in fairness, I did have many years to work it all out,’ she says. 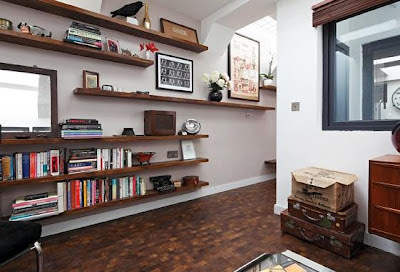 Today it is hard to imagine that the light-filled one-bedroom flat, with its streamlined shelves, glamorous gold-leaf bathroom and subterranean garden, was once a derelict public convenience. There are clues though. The tiles that form the splashback in the kitchen were reclaimed from the site’s original use, as was a mirror in the living-room. And propped on a kitchen shelf is a small public health poster warning of the perils of VD. But still, for Clark, this is home.