The truth of the matter is that I don't like Priuses - or is it Priuii? Either way I they rile me up.

I don't know if its their arrogant design or their drivers' smarmy look when they are overtaken, I just don't know. 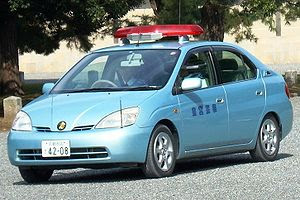 I'm fine with Honda's Civic half battery and half petrol engine car. I'm even looking forward to owning a battery powered Land Rover Discovery one time in the (very, very) distant future. Looking at the Prius just makes me clench my fist in preparation for smashing someone in the nose

Unlike some bloggers I know, I do, however, frown on peeing on the door handles of ANY vehicle!


My wife doesn't like me to swear, especially when I'm driving, so I try not to. But those Priuses do test me.

So I came up with an idea.

I'll convince the wife that my swearing is actually something else, so here goes;

So now, whenever I pass a Prius, I say in an amicable, cheery voice, "look there's a farking Prius'.